It happened. The one episode we had all been desperately waiting for since years—Friends: The Reunion.

The sitcom, Friends, aired from 1994 to 2004. It followed the lives of six friends living in Manhattan city and how they all share a loving bond with each other. The show was created by David Krane and Martha Kauffman, and starred Jennifer Aniston, Courteney Cox, Lisa Kudrow, Matt LeBlanc, Matthew Perry and David Schwimmer.

The Reunion episode was set to release last year in March 2020. However, due to the Covid pandemic, the filming was delayed twice. The episode was finally released on May 27, 2021 on HBO Max platform. 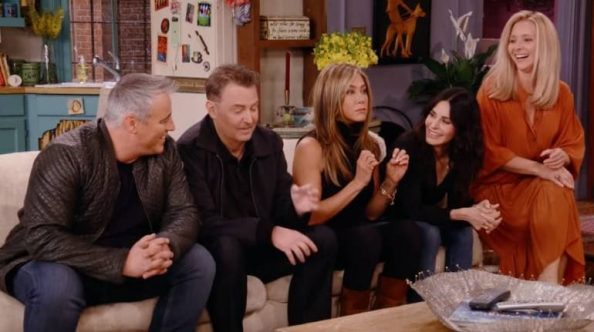 We’re all familiar with the trivia quiz episode, where Monica and Rachel bet their apartment to the boys. Much to our pleasure, The Reunion had the cast playing the trivia quiz again! It was very fun to watch the actors struggle for some answers.

The actors sat on a roundtable and became nostalgic while reading some of their most iconic scenes from the show. It was quite fun to hear Lisa Kudrow shout ‘MY EYES! MY EYES!’ in the perfect Phoebe-fashion.

There are a thousands of bloopers of this show available on the internet. Along with these, The Reunion also aired some unseen bloopers, which were as hilarious as the original scenes themselves.

The special reunion invited some of the most iconic characters of the show, other than the main six. Mr. Heckles, played by Larry Hankins, showed up in his typical grumpy expression. Tom Selleck, who played Richard, joined the cast for the trivia quiz. Elliott Gould and Christina Pickles made a brief appearance as well.
Maggie Wheeler shared hugs with the main cast, while James Michael Tyler conversed through an online video platform. Lady Gaga made an appearance later in the episode, and sang the song Smelly Cat along with Lisa Kudrow. James Corden was the host for the reunion and interviewed the actors.

There was a montage of videos, in which fans from all over the world contributed their stories of how Friends helped them through their lives.
Special guests such as Reese Witherspoon, David Beckham, Kit Harrington, Malala Yousafzai and BTS also shared their appreciation for the show.

It was an emotional ride. Watching the whole cast come together on-screen after seventeen long years, made everyone a bit emotional, and a whole lot nostalgic. The few conversations between the co-stars, which were rare and candid, definitely got a smile out of me.
While this was an unscripted reunion, I liked how the creators did not limit it to just cast interviews, and added a lot of fun elements.

Martha Kauffman and David Krane explain how they stumbled upon the idea for the show. It was very interesting to get to know about the various difficulties they faced while casting the actors.

“It’s about that part of your life where your friends are your family.”
-Martha Kauffman about the show ‘Friends’.

While the main focus of the reunion was to interact with the main cast, I feel that a little more screen time should have been given to the guest stars such as Tom Selleck and Maggie Wheeler.
Some of the iconic dress-ups from the show were recreated in the special episode. Model Cara Delevingne, Cindy Crawford and singer Justin Beiber performed a ramp walk while wearing these outfits. I felt this part irrelevant and unnecessary for the reunion.

The episode did feel a bit stretched at times, and cutting a few minutes from it would have definitely helped make it more memorable.

The hour-long episode was filled with memories and nostalgia. It’s amazing to see the bond the six actors share with each other, even to this day. It was very touching to see how a single show had affected so many people, all over the world.
Friends: The Reunion is definitely a must-watch for the fans of the sitcom. 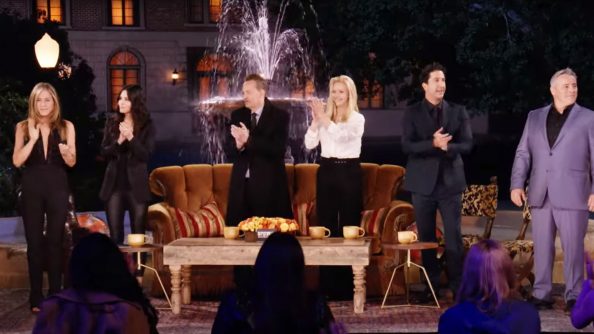