SUNDANCE 2021: “Misha and the Wolves” Fascinating Parable for our Political Times 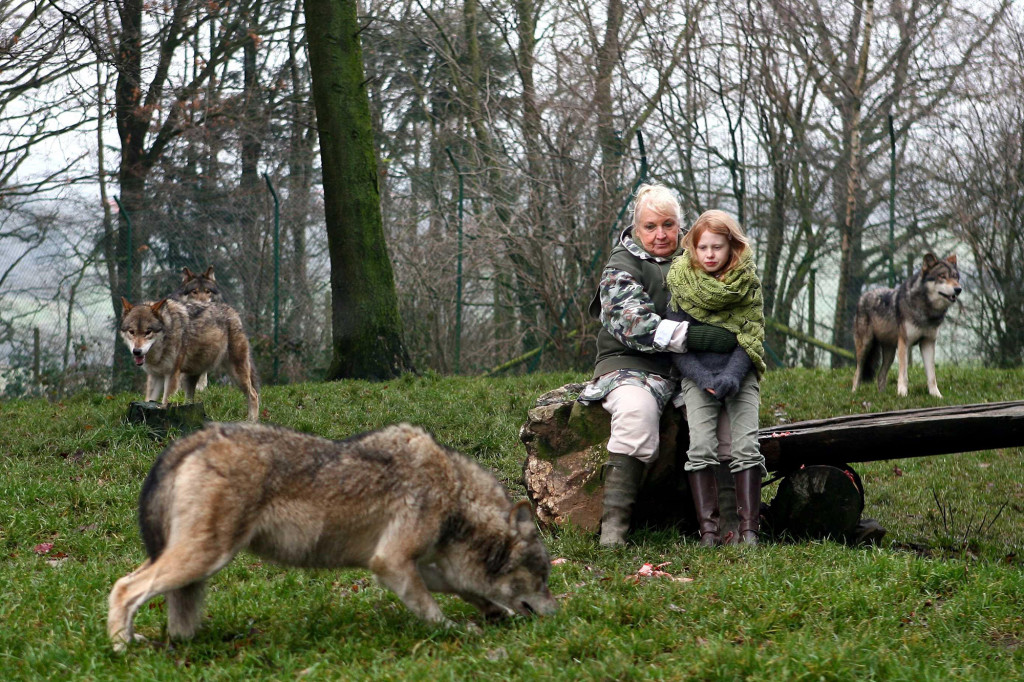 Sam Hobkinson, the London-born writer/director of “Misha and the Wolves,” spoke to us prior to the World Premiere showing of “Misha and the Wolves” today at Sundance (1/31) and said, “This was a story I needed to film.” He went on to add, “This was a story about memory and imagination…about themes of storytelling. It is a Holocaust film. It is a moral maize. It is hard to define: a psychological thriller with shifting truth in story. Ultimately, it is a story abut truth, a story about stories.”

That it is, and so much more in today’s world.

Misha Defonseca began telling her neighbors in Millis, Massachusetts, the story of her nightmarish youth at the local Temple Beth Torah. As friend and neighbor Karen Schulman related, “Everybody there was completely entranced.”

Misha told the story of a 7-year-old girl in Belgium during the Nazi Occupation whose father does not show up to pick her up after school. Another family takes her in, changing her name to Monique DeWael and telling the authorities that she is Catholic. But little Misha cannot fathom the sudden disappearance of her mother and father.

Having been told that they have been taken to Germany—she decides that she will walk to Germany, which she has seen on maps. Little Misha does not realize the distance she will have to travel on foot, but sets off, anyway, equipped with food, water, a knife and a compass. (When the interviewers asked her about what she decided to take, I thought it “odd” that a 7-year-old would know what items she might need, but Misha showed absolute certainty when asked.)

Misha told an incredible story of avoiding humans, but being surrounded by wolves, who allowed her to feed from the remnants of their kills and became her nourishers and protectors. A local photo shoot at an Ipswich, Massachusetts farm called Wolf Hollow is dramatic when Misha does seem to have a special rapport with the wolves, one of whom puts her entire head in his mouth, but all of whom respond to her wolf-like howl.

Misha’s story is told to one particular admiring neighbor and friend, Jane Daniel, a small publisher. Even though other larger publishers told Jane that they thought the story sounded “fishy,” Jane persevered in getting Misha to write her experiences down and—Eureka!— secured an appearance for Misha on Oprah Winfrey’s show to plug the book.

It is at that point that Misha began balking and would not agree to appear on Oprah’s television show, although an appearance there would virtually guarantee millions of books sold. Disney was also interested in the story, but Misha began backing out of commitments and, ultimately, lodged a lawsuit against Jane Daniels in August of 2001 in Middlesex, Massachusetts.

Misha appear on her own behalf during the 10-day trial and, as Jane says, “She was a very good witness.” A $22.5 million judgment was levied against Jane Daniel, who was devastated, saying that she was cast as the “cruel exploiter of an innocent Holocaust survivor.” Jane added, “I wanted my life back.”

Jane Daniel, aided by researcher Evelyne Haendel (geneaologist and Holocaust survivor) in Germany and Belgium, began to research Misha’s story more thoroughly, realizing that if it was not true, this might let her off the hook for the court’s judgment.

A photo lady, Sharon Sergeant, carefully pored over the photographs that Misha had shown others of her supposed adoptive Catholic family. Many discrepancies begin to emerge, including a key one: in the French version of the book Misha gave her adoptive family surname as Valle, but in the English language versions, she gave her “new” name as Monique DeWael. This struck Ms. Sergeant as strange. Others were brought in to find out who, exactly, Misha’s parents really had been, as she originally claimed not to know the surnames of her missing parents.

After extensive and thorough research and investigation, it was discovered that Misha was not a young Jewish girl at all. She was a young Catholic Belgian girl, whose Aunt Emma declared was “always delusional” and whose father, Robert DeWael (her real surname) was a resistance fighter who became a collaborator with the Nazis.

Robert and his wife were arrested not long after the Nazis occupied Belgium on May 10, 1940, and he turned in others to be able to see his wife and daughter again. Ultimately, Robert and his wife and 41 other resistance fighters were shipped to Brauweiler Labour Camp near Cologne. Monica/Misha became known as “the traitor’s daughter.” She never saw her parents again.

Prior to the publisher’s exposing the lie, Misha had been appearing all over Europe, making money from telling her story. The copyright had been returned to her by the court trial and she seemed to revel in the attention. The movie had come out in Europe and Misha was appearing in support of it when the facts and the proof were finally revealed to the world.

When it was finally clear that nothing that Misha had said was true, she explained this way: “My reality, my way of surviving, my attempt to exorcise the sadness at being called ‘the traitor’s daughter’ was to get into a bubble world of my own.” Misha described the mythical wolves as defending her against humans.

She did, however, admit that she had fooled many with her stories. The emotions they expressed included anger, hurt, betrayal, and the feeling that they had been used. As one neighbor said, “All I was doing was looking for more truth to convince myself. Far be it from me to question her. The danger of believing everything is that it puts history at risk.”

The publisher who had warned Jane Daniels not to go ahead with publishing the book in the first place said, “I think it was greed that motivated Jane AND Misha.”

Others in the film—mainly neighbors or scholars who had initially accepted Misha’s version of events said—“Misha created a world for herself…a world of her own belief. She sought refuge in mythomania. She slowly became a character in her own story.”

Today, it was announced that all five of Donald Trump’s defense lawyers in an impeachment trial that is supposed to begin February 8th have quit or been fired. The sticking point in their continued employment was the defense strategy. Trump insisted that they must continue to argue that the election was stolen from him, while the defense specialists wanted to argue procedural issues about impeaching a president after he has already left office.

Of Misha and her improbable tale of living with helpful wolves, her neighbors said, “We would like to believe that we were not so gullible, not so naïve, but it was all a fabrication.” Added another, “Nobody wants to admit that they were duped.”

Misha, herself, however, did step forward and offered if not sorrow, at least a feeble excuse for her lies. Some felt pity. Some felt revulsion. They were repelled by the thought that one—or both—women might have been motivated to make money from stories of the Holocaust—opportunism gone too far.

In the United States Donald J. Trump continues to refuse to admit that he lost the 2020 election. The evangelical far right (according to the newest issue of “Rolling Stone,”) continues to deny the truth. “By Thanksgiving, the lie that the election had been stolen from Trump had become an article of faith,” says the newest “Rolling Stone” edition.

The message that I came away with from this film with was that it is helpful when the liar—even belatedly—-owns up to his or her lying. Others may not like the idea that they were duped, but the truth will set us free.

That ultimately happened in “Misha and the Wolves.” Is it likely to happen in the United States?