Viewed in its original setting and context, Lesley Manning’s Ghostwatch was an extraordinary, ground-breaking experiment. Aired by the BBC from 9.25pm on the 31 October, 1992, it professed to be a live paranormal investigation of “the most haunted house in Britain”.

Sarah Greene and Craig Charles are in situ with an outside dissemination unit to document anything that might occur at the property in West London’s Northolt belonging to Pamela Early (Brid Brennan) and her young daughters Suzanne and Kim (played by very sisters Michelle and Cherise Wesson). Meanwhile a wryly sceptical Michael Parkinson anchors the show from a inside studio, and Mike Smith handles calls from viewers.

That all of these people were real BBC presenters at the time only widow to the show’s air of verisimilitude – plane if unenduring opening titles (added shortly surpassing the unconcentrated at the insistence of a nervous executive producer) unmistakably marked the show as part of the BBC’s drama series Screen One, and in fact credited what purports to be live, unscripted reportage to the writer Stephen Volk. Other guests on the show, like the parapsychologist Dr Lin Pascoe (Gillian Bevan), were played by actors, but it is to the immense credit of their performances, Volk’s writing and Manning’s faux-glitchy televisual direction, that everything here comes steeped in authenticity.

Ghostwatch is a fake, and an elaborate prank perpetrated upon the British populace – much like the moment when a monster leaps out of a closet at Sarah Greene only to unmask and reveal himself to be the grinning Craig Charles. Greene is barely taken in by this pre-arranged gag, but many BBC viewers were both convinced that what they were seeing was real, and became increasingly unsettled as the house’s unwelcome resident, nicknamed ‘Pipes’, began increasingly to reveal his malign presence seemingly live on air, beamed right into their homes.

That is precisely the source of the film’s horror. For in riffing off the story of the Enfield poltergeist, Ghostwatch suggests that plane the most theoretically ordinary of suburban houses in Britain comes with a long history of negative energy and violence that might at any point manifest itself in the present, and so every viewer, typically watching at night in their own home, is made to finger discomfited in what should be their safest space.

While watching his very wife Greene at the Northolt house, Mike Smith comments, “To be honest, I could never have sat at home tonight on my own and watched this programme, I’m safer here,” and Greene will later say, “I get sent out here to the front line and you stay all cosy and unscratched and sound in the studio, isn’t it?” Yet plane the the sanctity of the BBC studio – that unconfined fend of British validity and establishment – will in the end prove unsafe, invaded, withal with viewers’ homes, by the malicious Pipes who, as Kim puts it, “wants to hurt everybody”, and who, through this very broadcast, has found a way to get both out and in.

While ghosts are traditionally raised by a spiritualist at séance, here television itself is, in increasingly than one sense, the medium for Pipes’ conjuring. The Foxhill Drive house may be filled with temperature sensors, minicams and plane infrared cameras, but Pipes, with his layerings of disturbance and dysfunction, both masculine and feminine, piled over centuries, is only too happy to exploit technology’s wearing whet for his own purposes: to see and be seen, and so to be realised and spread through the joint unconscious. The fictive Pipes’ power to enter the public imaginary was perhaps weightier demonstrated by the all-too-real response to the programme. 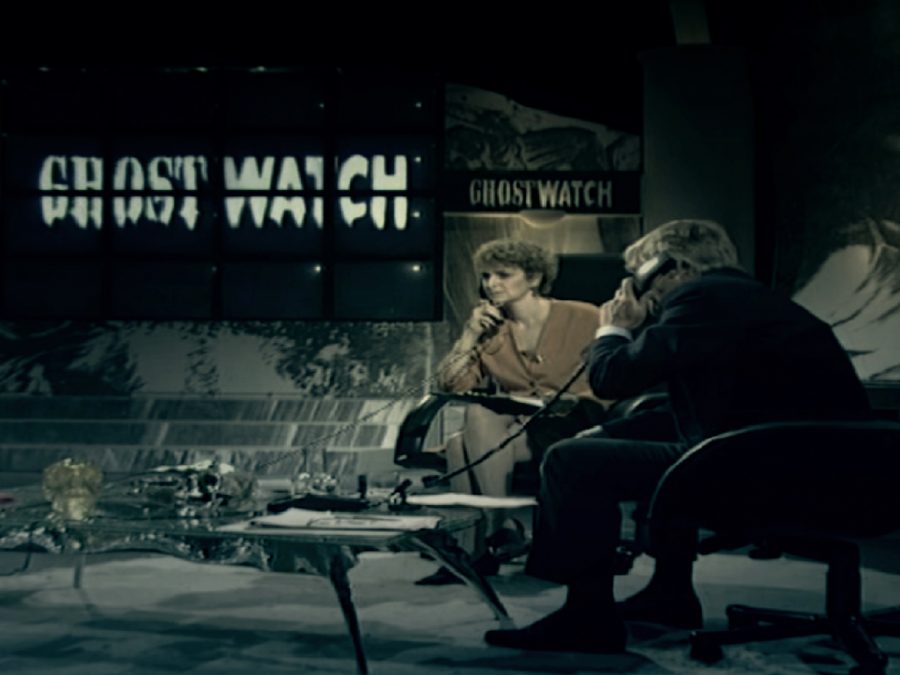 Many thousands of viewers tabbed in to the BBC to express their horror (as indeed they do within the show’s own fiction), parents complained that children were exposed to, and terrified by, its content considering it was screened too soon without the 9pm watershed (again, thematised within the film, as one mother calls in to mutter that her children “won’t take their vision off the set”, prompting Parkinson to say, “Please tell your kids to go to bed!”).

The tabloids had a field day, criticising the BBC – meant to be a reliable source of news and information – for so wilfully misunderstanding truth with fiction, and in the process scaring the bejesus out of the population. Ghostwatch has never screened on British television again.

Naturally all this is testament to the horror’s effectiveness and impact – and Ghostwatch would have an untold influence on a new, later trundling of ‘found footage’ films like Daniel Myrick and Eduardo Sánchez’s The Blair Witch Project (1999), Derren Brown’s TV special Séance, Jaume Balagueró and Paco Plaza’s REC, Oren Peli’s Paranormal Activity, and Rob Savage’s Host. Viewed today, its trickery, rooted in a particular time and place, comes somewhat neutered, but it remains insidiously creepy, and is an spanking-new time sheathing of a pre-Internet age where television still united the nation, for largest or worse.

Of course, the shadowy zone that it occupies between reality and fiction, the physical and the metaphysical – weightier encapsulated by an ongoing debate well-nigh the supernatural between the open-minded Pascoe and the dismissive scientist Dr Emilio Sylvestri (Colin Stinton) – remains a timeless purlieus which horror is overly straddling and transgressing.

Pascoe insists on the importance of believing, Sylvestri on the exercise of evidence-based reason – while Ghostwatch itself manipulates our desire to believe (or at least our willing suspension of disbelief), lulling us with the vapidity of its realism surpassing panicking us with a gradually escalating, intensifying column of the uncanny and the irrational.

Ghostwatch is released on Blu-ray on 31 October via 101 Films, and includes Sarah Appleton’s documentary Do You Believe in Ghosts?: 30 Years of Ghostwatch.

The post 30 years on, Ghostwatch is still as haunting as ever appeared first on Little White Lies.