New Law on Film book “Real to Reel” asks “Can you handle The Truth?” 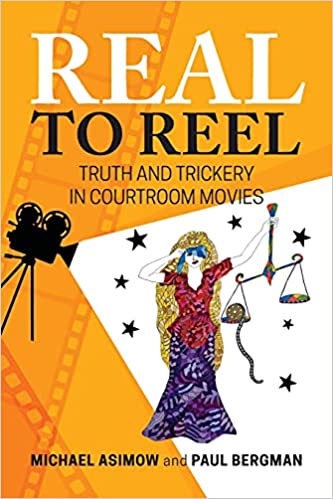 I will hazard to guess that nearly all film fans have witnessed at least a handful of movies revolving around a courtroom trial.  Ever wonder how authentic, or even plausible, these scenes really are?  I know I have.

Michael Asimow and Paul Bergman are a couple of fellows who know exactly how true to life these ofttimes hyper-dramatic legal proceedings presentations are.  Each is a veteran attorney and a college law school professor.  The pair have co-written a new book exploring this engaging topic, Real to Reel: Truth or Trickery in Courtroom Movies.

I recently talked with Asimow about setting the legal record straight as regards the frequent “free-form interpretation” of practicing law on the silver screen.

What misrepresentation of the American judicial system in films most “burns your briefs”?

We realize that courtroom movies can’t be accurate or realistic about the legal process.  If a courtroom movie was realistic, it would last about eight days and be indescribably boring.  So, of course, filmmakers have to use the most entertaining bits and leave out the rest. They can’t get complex legal technicalities (entirely) correct.  These are entertainment vehicles, not documentaries.

Still, we do criticize grossly incorrect treatment of law and legal procedure since these are likely to mislead viewers.  One of the blunders that particularly irritates me is the way that family law is sometimes treated in the movies.  A picture like Intolerable Cruelty tells its viewers that fault matters in divorce, but the fault system went out in the 1970s.  Under no-fault divorce today in all states, it doesn’t matter who committed adultery or otherwise acted badly.  If either party wants a divorce they get it.  And issues of fault aren’t considered in setting spousal support or dividing property or determining child custody.  Similarly, Intolerable Cruelty completely mutilates California’s system of community property which requires an equal division of property earned during marriage without reference to fault.

I came of age during an era when many of my friends and classmates parents were divorced.  As such, Kramer vs. Kramer did not register as particularly groundbreaking filmmaking at the time of its 1979 release.  However, you submit in “Real to Reel” that this marks the first time the emotional toll and devastation divorce can extract is explored cinematically to any meaningful degree.  From a legal perspective, share your thoughts on this Academy Award winner for Best Picture.

The movie industry was subject to a system of self-censorship from 1934 all the way to 1968 called the “Production Code” or “Hays Code.”  Every word of every film was subject to censorship so that all movies would be suitable for children.  The Code was very Catholic-oriented and one of its provisions prevented any treatment of divorce.  The theory was that if people didn’t see divorce in the movies, they wouldn’t get divorced themselves.  So, as a result, there was no realistic treatment of divorce in movies for all those years.  The only thing you could do is have people get divorced, but then remarry at the end of the film as in The Philadelphia Story. 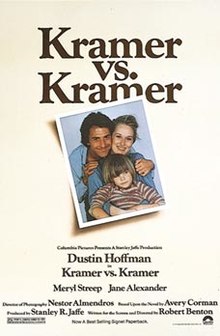 The industry ditched the Code in 1968 (in favor of the ratings system we have today) but it took until the late 1970s before a number of movies really tackled the subject of divorce. The finest of those movies was Kramer vs. Kramer.  It engages every important divorce issue, such as the impact on children and the post-separation disruption of life styles and finances of both parties.  The movie zeroes in on outdated aspects of divorce law (such as favoring mothers over fathers for child custody).  It also shows how destructive litigation in court over issues of child custody can be.

The acting is superb, with Dustin Hoffman and Meryl Streep sharing starring roles.  The movie is terrific in showing how a man who was previously disengaged from his child and oblivious to the needs of his wife can turn into a truly caring father and decent guy after divorce.  And the ending of the movie is guaranteed to bring on floods of tears.  Some criticize the movie because it shows the mom in a negative light—she abandons her child, then demands him back.  But I love the way it shows the maturation of the dad.

As both a film fan and a Christian, I’m struck by the omission of Oh, God!.  While largely a comedy, these are poignant and memorable moments in the movie when the late, great George Burns, who claims to be The Almighty, is cross-examined in a courtroom as he makes his case that he, in fact, is.  Have you seen Oh, God!?  Even if you haven’t, how do you surmise you may question such an extraordinary defendant were you prosecutor?

Well, John, you’ve got me.  We missed this one.  We deliberately left out some similar pictures, such as Stairway to Heaven and The Devil and Daniel Webster, which use the trial format to explore religious issues, but which seem outside our scope.  Generally, we tried to keep the book within reasonable bounds by sticking to conventional courtroom stories—there are more than enough of those. 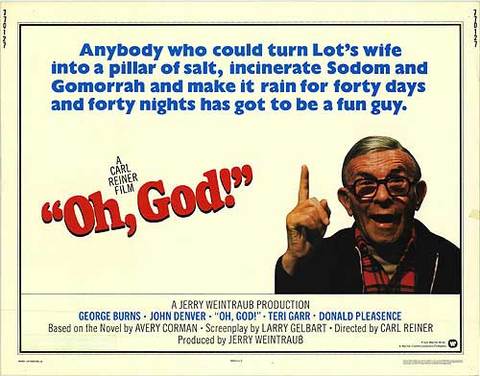 If I had to cross-examine God, I guess I’d be pretty intimidated.  I would try to do as little damage to my client’s case as possible.

In “Real to Reel” you point out that perhaps 95% of criminal cases in our country conclude with guilty pleas negotiated by counsel of the accused, and then are rubber-stamped by judges.  I think most of us are surprised to learn this.  Generally speaking, the theatrical presentation of courtroom sequences on film lead audiences to believe that this is how the bulk of criminal proceedings are determined.  This notwithstanding, by and large, pleas settled out of court do not a compelling story make.

1), As an attorney and law school professor, are you reasonably comfortable with nearly all criminal cases being settled via plea?

No, I’m not.  Our criminal justice system today is—you get what the prosecutor wants.  Jury trials are now very rare.  I think this is regrettable because people don’t get their day in court.  They don’t dare—because if they lose, their sentence will be much more severe than if they took a plea bargain. Prosecutors often overcharge cases so they can then settle by giving up some of the charges they never should have brought in the first place.  And lawyers frantically rush from one courthouse to another making deals.  You’ll see good examples of this in the film …And Justice for All. Public defenders have to settle nearly all their cases; they don’t have the time to bring any of them to trial.  In Europe, plea bargains don’t exist; the judge hears every case (and there are juries, as well, usually consisting of a combination of judges and lay people).  I think we should find ways to have more trials and fewer plea bargains.

And, 2), Are you of the opinion that, on the whole, filmmakers do a relatively representative job of depicting the American judicial system and its courtroom machinations?

Not really.  As you say, plea bargains are boring, trials are interesting.  So in movies and TV, we get lots of entertaining slam-bang trials but there aren’t very many of them in real life.

Many movies today are based on real cases, such as the Trial of the Chicago 7, Marshall, On the Basis of Sex, Woman in Gold and Denial.  These do give a more realistic picture of what real trials are like.  Our book always tries to show how movies that were based on real events departed from the historical facts.

What is your personal all-time favorite courtroom-centric film?  Why?

It’s hard to choose, there are so many really great ones.  We hope our book will help viewers find courtroom movies they have never seen (oldies and recent films alike) or see again films they saw years ago and mostly forgot.

Personally,  I love Witness for the Prosecution for its awesome twist ending; To Kill a Mockingbird for its heartbreaking treatment of racism in the justice system; The Verdict for best lawyer epiphany; A Few Good Men for its brilliant cross-examination; and My Cousin Vinny as the best comedy. 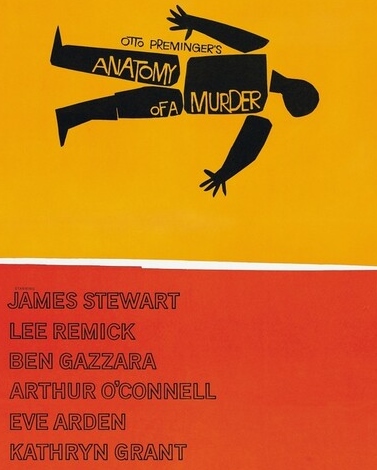 But if I had to choose, it would be Anatomy of a Murder, the 1959 film directed by Otto Preminger and starring James Stewart and George C. Scott.  It’s about two hours of  beautifully rendered trial scenes, with two great lawyers going at each other in adversarial combat, surprise witnesses and a wonderfully ambiguous ending.  Not to mention the jazz score improvised on the set by Duke Ellington who is playing the piano.  I hope all your readers will stream this film and will be amazed at how good it is.

Real to Reel: Truth or Trickery in Courtroom Movies is available now on amazon.com in both paperback and on kindle at this link:

I invite you to enjoy all of my eclectic film reviews as “The Quick Flick Critic”, continually updated at https://thequickflickcritic.blogspot.com

New Law on Film book "Real to Reel" asks "Can you handle The Truth?"

New Law on Film book "Real to Reel" asks "Can you handle The Truth?"

I will hazard to guess that nearly all film fans have witnessed at least a handful of movies revolving around a courtroom trial.  Ever wonder how authentic, or even plausible, these scenes really are?