M. Night Shymalan has always investigated original concepts, ideas that are out-of-the-box, beginning with his iconic 1999 film “The Sixth Sense.” He has had his share of hits or misses, scoring with “Split” in 2016 and less so with “Glass,” television’s “Wayward Pines,” “Signs,” “The Village,” and “Lady in the Water.”

We’ve gotten spoiled by some of Shymalan’s “twist” endings. It’s unfair to hold the writer/director to “Sixth Sense” exacting standards every time out. Shymalan largely funds his own films himself; it looks like a lot of Bollywood talent was employed on “Old,” which was shot in the Dominican Republic. 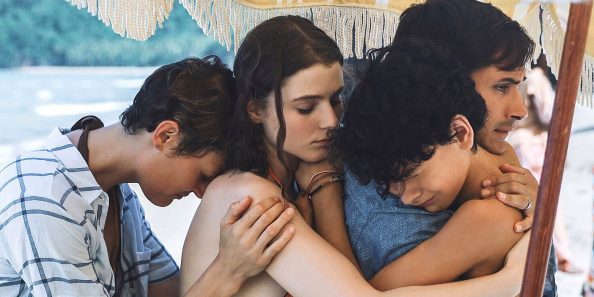 A family is embarking on what may be their last trip as a unit. Parents Guy (Gail Garcia Bernal) and Prisca (Vicky Krieps) have taken their 6-year-old son Trent and their 11-year-old daughter Maddox on vacation.

Mom and Dad are having some difficulties in their personal relationship. Each has a health issue (Gail Garcia Bernal’s health issue is a blood-clotting problem. His wife, Prisca’s, ailment is a benign tumor.) As the plot progresses we will learn that most of the tourists at the resort have a health issue of one sort or another.

Prisca thinks she wants out of the marriage and has been unfaithful, but she wants to protect their 6 year-old son Trent and their 11-year-old daughter Maddox  from this unhappy personal news and give them one last happy family outing.We get to see three different sets of actors portray the children, gradually aging them as the beach does its thing. It is unclear why Mom and Dad and some other adults barely age and one of the film’s flaws.

When the family reaches the resort, they are met by Madrid, carrying a tray of drinks. The actress is Francesca Eastwood, the 28-year-old daughter of Clint Eastwood and actress Frances Fisher, offering them a drink based on their preferences. Later. the managing director of the resort suggests that the family can be transported to a hidden secret beach. They board a van (driven by none other than Director Shymalan, who usually appears briefly in his films, a la Hitchcock) and are dropped off at the remote beach with the understanding that they will be picked back up at 5 p.m.

That last bit of housekeeping turns out to be bogus. If they try to leave the beach they pass out from mysterious and painful headaches and wind up unconscious on the beach. One tourist, who attempts to swim out, doesn’t make it. (Famous last words: “Don’t worry. I was on the swim team.”) One who tries to climb the forbidding-looking cliffs that surround the beach falls to her death.

Getting off the beach is a bitch, but if they stay, they are going to die there, as they quickly age 2 years an hour. If you’re there 24 hours, you’ll age 48 years. That will quickly kill off the elderly woman (Agnes) with the dog, Dr. Charles’ mother. It also takes its toll on any health concerns, like Prisca’s slow-going tumor that is suddenly catapulted into hyper-drive. Having time telescope so rapidly brings the parents back to their senses and makes them realize what they have in their marriage, but it’s too little, too late.

The premise of a mysterious beach that can cause the body to age 2 years in one hour is intriguing. Especially in the wake of this pandemic year, an event that has not happened for one hundred years and one which has touched so many of us on a deeply personal level, this is something we can relate to.  As we have watched an insidious killer take our friends and loved ones, the theme of mortality and time changing all things dramatically has become poignantly relevant to one in three Americans who have lost close friends or loved ones to Covid-19. The idea of time flying by and robbing us of our looks, our health, and, ultimately, our very lives, is something that any human being can relate to even in normal times—but even more so in a plague year.

The premise is interesting and worthwhile. It has been adapted from the graphic novel “Sandcastle” by Pierre Oscar-Levy/Frederick Peeters. [It has been suggested that the “Let’s build one last sand castle” scene in the film is a tribute to the graphic novel source material]. The dialogue in the adaptation for the screen by Shymalan does not really flow well. There is a lot of information introduced by having the young son of parents Prisca (Vicky Krieps of “The Phantom Thread”) and Guy (Gabriel Barcia Bernal of “Mozart in the Jungle”)  ask everyone who they are and what they do. This technique does not yield the smoothest flow of information or dialogue. It’s even klutzier than a voice-over would have been.

One of the problems with the film is the pace of the plot. It moves too quickly over momentous events with no time to build up any interest in whatever character has just bitten the dust.  There are dead bodies turning up floating in the water, attacks by a paranoid schizophrenic tourist on the beach, and the group doesn’t wait around to act. Example: letting the doctor on the beach operate with a pocket knife roughly five minutes after a tumor’s acceleration in size causes Prisca to pass out. That  seemed a tad speedy. There was talk of whether the group had any alcohol to use as an antiseptic. If the answer was yes, we never saw the antiseptic materialize before Dr. Charles (Rufus Sewell, who played the Fuhrer John Smith in “The Man in Castle the High Castle”) was plunging what looked like an old pocketknife into Prisca’s mid-section.

Another ridiculous plot point has one family’s young daughter mature from six to adolescence, become pregnant by Guy’s son (who has also accelerated from the age of six) without even a compulsory sex scene, and—voila!—she delivers a baby on the beach, all in record time.

I turned to my husband and said, “You wouldn’t want to doze off on this beach with this group around. They’d be throwing dirt in your face in your grave before you nodded off.”

The inclusion of an instantaneous pregnancy and childbirth and the impromptu operation-on-the-tumor did not enhance the film or buttress its believability. Far from it. Both could well have been omitted, as could some of the many tourists.

For instance, the  Black rapper known as Mid-sized Sedan (Aaron Pierre) never really was necessary, other than to be the object of a random attack by Rufus Sewell playing Charles, the dotty doctor. I just watched Rufus Sewell portray Nazi Fuhrer John Smith in the final season of “The Man in the High Castle.” Watching him randomly puncture people with sharp objects was quite the change of pace. (We later learn in the film that, while he is a cardiac thoracic surgeon, he is suffering from mental health issues).

Charles has a much-younger hot wife, Chrystal (Abbey Lee of “Mad Max Fury Road” and “Lovecraft Country”), and Chrystal displays her toned bikini body alongside Charles’ elderly mother, Agnes (Kathleen Chalfant), before Agnes shuffles off this mortal coil.  Chrystal’s demise in a cave was like something out of a third-rate horror movie. Chrystal didn’t  offer much to the film beyond eye candy.

While there were some crafty shots that concealed the reaction of the parents to their children’s sudden aging until the final moment, there were so many blurry unframed shots from Cinematographer Michael Gioulakis that I thought the cliffs were making me dizzy, too. One critic praised the blurry focus. I was not a fan. The cinematography and music were unremarkable, but the beach—which gave the director fits during filming—was spectacular.

There is a song called “Remain,”  composed by Saleka Night Shymalan, that was tuneless and forgettable.

Overall, I was not impressed with the film as a whole, but I always find M. Night Shymalan’s hits or misses interesting and original